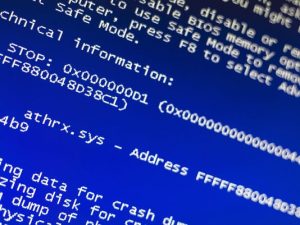 The computers were infected by the Zeus Trojan horse.

More than 100,000 computers, which were infected by the Zeus Trojan horse, suffered from what is known as the blue screen of death (BSOD) after the malware destroyed itself for no apparent reason.
The blue screen of death and slow computer are widely considered the ultimate nightmares of PC users, who, in such cases, need to get a computer repair.
The blue screen of death refers to an error message when Microsoft Windows experiences a fatal error condition. The monitor screen turns blue and fills with a typically cryptic description of why the computer will crash and that any data not saved to the hard drive will be lost forever.
Reportedly, the Trojan horse was activated in April and was ordered to self-destruct. Experts failed to provide an explanation as to why the malicious software ”committed suicide.”
Zeus and other such Trojans are mainly used to obtain financial data from infected PCs. According to OSnews, Zeus is a family of Windows malware that is special in that it has the uncanny ability to look completely unique on every infected machine, making it very hard to detect and remove.
Zeus is sold in kits for about US$700 to all sorts of people with criminal intentions.
Read more
http://www.hardocp.com/news.html?news=Mzk0NjcsLCxoZW50aHVzaWFzdCwsLDE=
http://arstechnica.com/security/news/2009/05/zeus-botnet-hits-the-kill-switch-takes-down-100000-pcs.ars
http://www.osnews.com/story/21461/Botnet_Kill_Switch_100000_BSODs
Tags: blue screen of death BSOD Zeus
Share on Facebook Share on Twitter