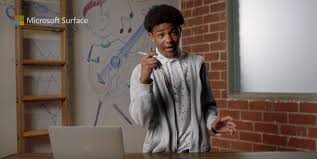 In a new ad that some might find slightly sneaky, Redmond tries to explain why the Surface Pro 7 is far, far better than Apple’s sad little machine.

We’re all supposed to be reaching for unity these days, but the message has its limitations.

Where Apple and Microsoft might (claim to) agree on privacy, there’s still a little friction between the two when it comes to your unity with your laptop.

Well, at least as far as Microsoft is concerned.

It chose the weekend to snort, scoff, and sneer at Apple’s MacBook Pro. All in 30 seconds of slightly sneaky salesyouthship.

In Microsoft’s latest ad, we have a cool young man — only they really know about laptops — presenting the MacBook Pro and the Surface Pro 7 side-by-side in a highly objective assessment.

The young man explains that the Surface Pro 7 comes with a pen and a touchscreen. The MacBook Pro has a little Touch Bar that upsets the young man. He wants a touchscreen — and who can argue with him?

Apple’s Touch Bar is to ease of use what the fork is to soup eating.

The Surface also has the delight of a detachable keyboard, whereas nothing comes off the MacBook at all. How retrograde. Then again, the MacBook Pro does now have a keyboard that actually works, which is progress.

The Surface is, so this expert tells us, a much better gaming device and it can run all the apps you want.

The MacBook Pro is, indeed, a sadly imperfect machine. Well, the one that’s in this ad. As far as I can see, it isn’t the M1 MacBook Pro that caused my colleague Jason Cipriani to feel amazed and has an actual Esc. key. It’s the Intel one, which is, oh, so last year.

I found myself squinting to my eyes’ limits in order to read these tiny words at the bottom of the screen: “Pen and some apps sold separately.”

So the price comparison may not be quite as elegant as first appears.

Some might offer that if you really want a touchscreen, a detachable keyboard, and a pen — or merely a pencil — you might consider the iPad Pro.

As for that painful Touch Bar, it seems that Apple is, finally, disposing of it in its next MacBook Pro iteration. And what’s this I hear? Microsoft may be releasing the Surface Pro 8 in, oh, mere days.

Could this be the reason behind the sudden price-based enticement? So this could ad merely be saying: “Our old machine is better than their old machine. Well, their really old machine.”?

These ad people. They’re always trying to get you worked up.