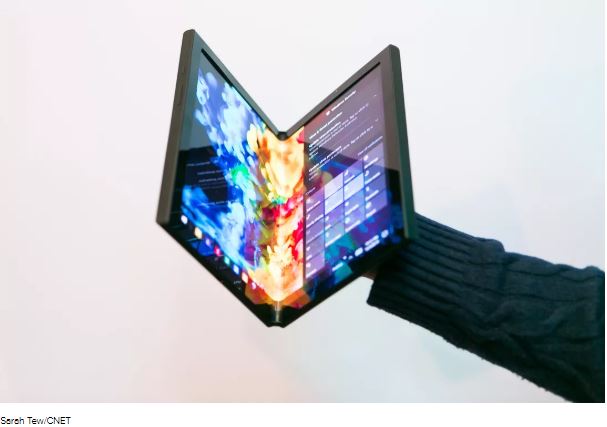 The last several times we tried to reinvent the laptop, not that many people cared.

The clamshell is a classic for a reason. That screen-plus-keyboard design, hinged in the middle, is what almost every laptop has looked like for the past 30 years. Yes, people have tried to reinvent this wheel many times, often to great fanfare and with predictions of paradigm shifts, but at the end of the day, most of us are still clamshelling it.

Meanwhile, these upstart designs, with flipping, folding, flexing screens, unique keyboards and other future-forward features, rarely make it past a first or second iteration before being relegated to a dusty archive of never-rans.

In 2020, we’re already under the spell of flexible plastic laptop screens like the Lenovo X1 Fold, Dell Concept Ori and Intel Horseshoe Bend, or new dual-screen systems like the Dell Concept Duet or the Lenovo ThinkBook Plus. Even last year, secondary screens invaded laptops from Asus, HP and others.

As with any eye-popping new technology, I of course, think it’s all pretty cool. So far, I’ve been more than impressed with the handful of folding-screen PCs I’ve gotten hands-on time with, and I even like some of the dual-screen models, especially the use of E ink (a generally underappreciated technology) in the ThinkBook Plus.

But, I also know full well that we may be back here in a couple of years, asking “Whatever happened to folding-screen laptops?” That’s because we’re all creatures of habit. Even if everyday clamshell laptops are boring, we’re used to them. They’ve stood the test of time as productivity machines, and we have the muscle memory to back that up. Mess with the established order at your own peril.

The only real exception to this for laptops is the 360-degree hinge, first popularized by Lenovo’s Yoga line and now found everywhere. Why did that hybrid setup succeed where others failed? The simple answer is, because it did the least to mess with the look, feel and functionality of the clamshell.

Here are some wildly inventive laptops I’ve seen, tested or reviewed over the years. Before we get too hyped about folding screens, try to remember the last time you saw any of these out in the wild.

This massive 20-inch laptop was a favorite around the CNET Labs when it first appeared, but sadly it didn’t last long. The low-res 1,650×1,050 screen probably didn’t help.  Read our HP Pavilion HDX review here.

From the heat-sensitive strip for opening the lid to the way the keyboard hovered at a 20-degree angle in midair, there was just no way the sharp-looking but unusual Adamo XPS was going to have legs.  Read our Dell Adamo XPS review here.

Dell has tried the swivel screen a couple of times, both in a 2011 product called the Inspiron Duo and in this one-shot version of the XPS 12. It wasn’t bad, but the extra bezel required to frame the gimmick was unsightly, and the entire thing felt too fragile.  Read our Dell XPS 12 review.

At the time, I didn’t hate the slide-out keyboard found in this early Windows 8 hybrid, but the overly complex mechanism proved impractical, and I only saw the idea used in one other place, in this 2013 Sony Vaio Duo 13.  Read our Toshiba Satellite U925t review.

Acer still uses a similar hinge idea, still called the “Ezel,” in its new ConceptD PCs, but this early version made a serious strategic error by placing the touchpad above the keyboard.  Read our Acer Aspire R7 review.

Lenovo has tried a few versions of this incredible shrinking laptop. In some, the lower screen is an LCD; in others, it’s E Ink. Most were Windows-based; one version ran Android. The new X1 Fold and ThinkBook Plus from Lenovo both borrow from the Yoga Book’s DNA, so in a way, it lives on.  Read our Lenovo Yoga Book review.