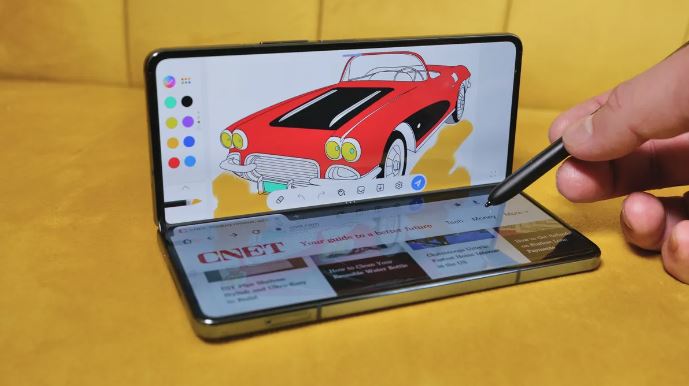 The Galaxy Z Fold 4 is the fourth version of Samsung’s phone that folds open into a small tablet. It costs $1,800. Yes, that’s a lot of gravy. Most of that price comes from the Z Fold 4’s 7.6-inch foldable display. That same folding screen has a high refresh rate for playing video games, a clever camera hidden behind it for video calls and S Pen support for writing and drawing. Despite not being a huge fan of previous Galaxy Fold phones, I cannot get enough of the Galaxy Z Fold 4.

Remember the first time you had a crush? Maybe you didn’t even know what a crush was but found yourself enamored with someone else? That’s kind of what happened to me with the Galaxy Z Fold 4. And like a kid with their first crush, it’s hard to describe why I’m so drawn to it, especially since it’s so similar to last year’s Fold 3 (which I liked, but wasn’t crazy about).

Part of my infatuation with the Fold 4 comes from its dozens of small refinements compared to the Fold 3. The hinge is a little thinner. The phone is slightly lighter. The bezels on the cover screen are just a tad smaller. The body is a little wider, making it more enjoyable to use when closed. Everything about the Fold 4 feels more tailored, including the software. Samsung made multitasking on the Fold 4 approachable and easy.

In fact, after two weeks of using a review unit on loan from Samsung, the Fold 4 is my favorite Android tablet. It showcases Samsung’s engineering and software improvements and is an impressive reminder that we are still at the dawn of foldable phones.

But then there’s that $1,800 price tag. I could buy a Galaxy S22 Ultra and an iPad Mini for the same price. Yet, that’s not a fair comparison because neither of those devices can fold open or closed. And remember, $1,800 is the starting price. A 1TB Fold 4 will set you back over $2,000.

If you are tempted by the Fold 4, know that there are many generous discounts from carriers, third-party retailers and Samsung to make less of a dent on your wallet.

The Galaxy Z Fold 4 has a tailored design

And as far as foldable phone issues go, let me address the biggest one right off the bat. Yes, you can see and feel the crease in the main display. And no, it doesn’t bother me. Do I wish there wasn’t a crease? Yes, but when I use the Fold 4, the crease isn’t this glaring scarlet letter.

The Fold’s hinge is a large part of what enables its unique foldable design, and the one on the Fold 4 got redesigned. It’s slimmer than the Fold 3’s but also firmer, which makes the Fold 4 incredibly satisfying to close. But because of the Fold’s size, you can’t open and close it with one hand like you can the Galaxy Z Flip 4.Galaxy Z Fold 4 Review: My Favorite Android Tablet12:38Large play-pause toggle00:0012:38

Combine that hinge with the aluminum sides and Gorilla Glass Victus Plus, and the Fold 4 feels more solid than any other foldable phone I’ve tested. The hinge also enables several useful and distinctive use cases, such as serving as a tiny stand for watching films and shows on a plane. Or being its own tripod for taking photos and videos.

The Fold 4 is 3 millimeters wider than last year’s Fold 3, which makes it feel less awkward and cumbersome when it’s closed in phone mode. However, the cover screen’s keyboard is still a little cramped for my hands.

The Fold 4 is all about Android 12L and Flex Mode

Samsung packed the new Fold with features that range from significant updates, like the taskbar-turned-dock (which I genuinely enjoy using), to ones that are more, “Oh, that’s kind of fun, but will I use that?” The new cursor and trackpad available in Flex mode fall under that second category.

The Fold 4 runs on Android 12L, which is optimized for large screens and foldables. Samsung’s lovely tweaks to One UI (its window dressing for Android) really make you feel like you’re using something special without compromising on features and capabilities you’d expect from a phone that doesn’t fold in half.

The dock at the bottom of the screen makes getting in and out of multitasking apps easy. Just drag one app on top of the other, and that’s it. That ease of use is just another reason the Fold 4 is so appealing to me. Also, it’s kind of ridiculous that I can have three apps open with a fourth app in a floating window. Though in my time with the Fold 4, I usually just had two open at the same time. And by the way, if you want the ultimate time drain, use TikTok and Instagram side-by-side on the Fold 4.

One of my favorite things to do on the Fold 4 is watch videos. (That might partially be because I caught COVID while reviewing the phone and could do little else besides watch shows like The Sandman and The Rehearsal.) A feature I truly dig is that if I’m watching a video and close the Fold, playback picks up instantly on the 6.2-inch cover screen and vice versa. By the way, videos and games on the cover screen look fantastic even with the slim aspect ratio.

Then there’s Flex Mode, which moves the app you’re using to the top of the screen while displaying the controls at the bottom when the phone is positioned half-open. For example, the YouTube app shows videos on the top half of the screen while the bottom half is for scrolling through comments or the description.

Samsung even fixed its own Gallery app so now when you edit a photo in Flex Mode, the picture stays on the top half with the edit tools and interface on the bottom. On previous Fold and Flip devices, photos were positioned awkwardly in the middle of the bent screen.

A new addition to Flex Mode is the ability to use the bottom of the screen as a mini trackpad with a cursor on the top. I can’t say I found a lot of use with that setup, but I love that Samsung is embracing the Fold’s unique shape. More of this please! The Fold 4 also supports the S Pen, as did the Fold 3. It’s fun to use, though I wish it could magnetically attach to the side of the Fold like the Apple Pencil does on the iPad.

Some features are on by default, but others are buried in Settings (most under something called Labs, which feels like a beta purgatory for software features). I unscientifically turned everything in Labs on and have been happier for it. But know that not all apps are optimized for the Fold 4. For example, Instagram awkwardly floats in the middle of the screen with arrows on either side to align it on the left or right.

The Z Fold 4 has five cameras

On the back cover, there are three cameras: a main camera with a wide angle lens, another one with an ultrawide lens and a third with a 3x telephoto lens. There’s a selfie camera on the cover screen and an under-display camera behind the main screen.

The only times I noticed the Fold 4’s camera struggle was under low or mixed lighting, and in direct sunlight, which yields lots of lens flares. If this wasn’t a folding phone, this would be unacceptable for a phone that costs nearly $2,000.

The best part of the Fold 4’s cameras actually has little to do with the lenses and sensors. Rather, it’s the phone’s design. This phone is its own tripod. You can put it in all sorts of places or position the camera at different angles. One of the coolest features is the ability to use the rear cameras for selfies, or share a preview of the camera’s viewfinder with your subject.

Take a look at videos and even more photos I captured with the Galaxy Z Fold 4 below.

The Fold 4’s performance is fast and buttery-smooth

The Fold 4 has the Snapdragon 8 Plus Gen 1 chip, the fastest (and newest) processor in any Samsung phone. It’s the same processor we see in gaming phones and the 2022 Razr, the newest foldable phone from Motorola. And speaking of gaming, the Fold 4 is the perfect size for mobile gaming. The main screen makes gaming feel immersive. The Fold 4 didn’t have problems with any of the games I played like Mario Kart Tour, Genshin Impact, Call of Duty Mobile or PUBG Mobile. The Fold 4’s great gaming experience is an unexpected delight that also adds to its appeal.

The speedy processor and high refresh rate screen weren’t just good for games. The animations look incredibly smooth. In benchmark tests, the Fold 4 scored higher than the Fold 3 and S22 Ultra, another sign that its new processor brings a slight speed boost.

The Galaxy Z Fold 4’s battery is the same size as the Fold 3’s, which was just OK. I was hopeful that the combination of Android 12L and the Snapdragon 8 Plus Gen 1 processor would mean more battery life. To an extent I did experience longer battery life, but not by much.

The Fold 4 made it through most days on a single charge. But I found myself topping it off at around 8 p.m. or 9 p.m. I also ran a test where over three-quarters of an hour I watched YouTube videos, scrolled through my TikTok feed, played Mario Kart and FIFA Mobile and took a 5-minute Zoom video call. The battery went from 100% to 82% in those 45 minutes.

Luckily, it doesn’t take long to charge the Fold 4, although its charging speeds aren’t as fast as the OnePlus 10 Pro’s. After charging the Fold 4 for 30 minutes, the battery went from 20% to 73%. Remember, the Fold 4 doesn’t come with a wall charger.

The Galaxy Z Fold 4 adds all of the nuance and refinement that the Fold 3 needed. But if you have a Fold 3, there’s no need to upgrade to the 4.

If you have a Fold 2, it might be worth upgrading, especially if you can score a sweet trade-in deal. You get a faster processor, a more robust build, waterproofing (though the Fold 4 still lacks dust resistance), S Pen support and superior cameras.

The Fold 4 clearly isn’t priced for mass appeal but it is identical to what the Fold 3 costs. I do think it’s a fair price for what you get in 2022, which is a premium phone made with parts that are unique, cutting-edge and expensive. But so is a Ferrari SF90 Spider, and that costs over half a million dollars. Despite my crush, I won’t be buying the Fold 4 or a Ferrari anytime soon. And we are still years away from a foldable phone being affordable to most people.

As for me, I hope my infatuation with the Fold 4 lasts. Only time will tell.