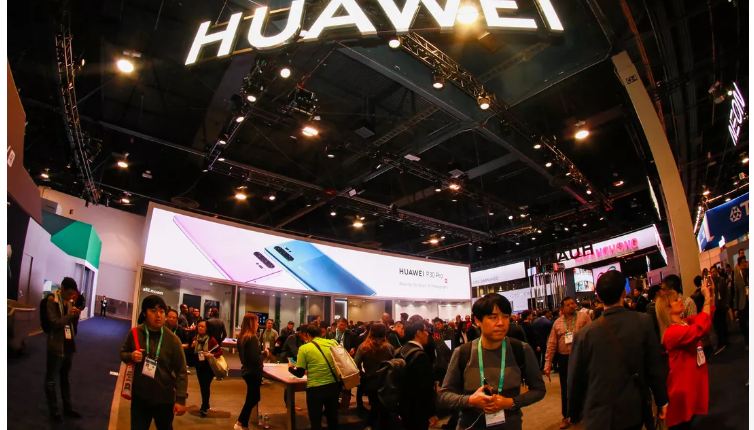 We break down the saga of the controversial Chinese telecom giant, day by day.

Huawei is the world’s No. 1 telecom supplier and No. 2 phone manufacturer, but it’s a pariah in countries like the US. For more than a year, there’s been no shortage of scrutiny on the Chinese telecom giant, and a number of countries have banned the use of its networking equipment. Its phones are virtually invisible in the US despite its massive presence around the world.

The company’s chairman predicted that 2020 will be “difficult” for Huawei, and the early going seems to bear that out — the US is continuing to pressure allies to block Huawei from their next-generation 5G wireless networks. Despite this, January saw UK Prime Minister Boris Johnson giving the company approval to build non-core parts of the country’s 5G infrastructure, setting an important precedent as the wireless tech becomes increasingly mainstream.

In April, Huawei reported that its revenue for the first quarter of the year was 182.2 billion yuan (around $25.7 billion) — an increase of 1.4% year over year — despite the coronavirus pandemic.

The core issue with Huawei has been concerns about its coziness with the Chinese government and fears that its equipment could be used to spy on other countries and companies. It’s the reason why the US banned companies from using Huawei networking equipment in 2012 and why the company was added to the US Department of Commerce’s Bureau of Industry and Security Entity List in May 2019, following an executive order from President Donald Trump effectively banning Huawei from US communications networks. A year later, Trump extended the order until 2021.

The US offered a reprieve to companies, allowing them to work with Huawei through temporary licenses, but the Commerce Department has also accused the company of exploiting the rules to continue using American technology in its semiconductor design.

Huawei has long denied any wrongdoing and continues to maintain its innocence.

It can be tough to keep pace with the sheer number of headlines, so here’s a timeline gathering a bunch from 2018 to today.

May 18, 2020: Huawei criticizes new US rules as “pernicious” and “arbitrary,” and China reportedly prepares to take “forceful countermeasures” against US tech companies.

May 15, 2020: Commerce Department tightens export controls on Huawei, and extends Temporary General License for another 90 days.

May 14, 2020: Trump extends executive order targeting Huawei for another year.

April 29, 2020: Huawei reportedly expands partnership with European chipmaker in the face of increasing US restrictions on suppliers.

April 21, 2020: Huawei reports 1.4% revenue increase for the first quarter of 2020 as it grapples with the coronavirus pandemic. Also, senior British official reportedly says UK is unlikely to reconsider “firm” decision to allow Huawei access to non-sensitive parts of its 5G network.

April 13, 2020: Huawei warns that disrupting its involvement in Britain’s 5G rollout would do the country “a disservice.”

March 12, 2020: Trump signs law to prevent US rural telecom carriers from using Huawei network equipment, and France is reportedly planning to allow some Huawei gear in its 5G network.

March 11, 2020: US officials reportedly postpone a meeting on potential new restrictions on sales of technology to Huawei and China, and the Commerce Department extends Huawei license through May 15.

March 4, 2020: Nokia and Ericsson pitch themselves to US lawmakers as Huawei 5G alternative. Also, Huawei pleads not guilty to new US criminal charges in 2018 case and FCC’s Brendan Carr says US “cannot treat Huawei as anything other than a threat to our collective security.”

March 3, 2020: US senators urge UK to reconsider use of Huawei gear in its 5G network.

Feb. 24, 2020: Huawei will launch its P40 Pro in Paris on March 26, its upgraded Mate XS foldable will be available outside China and the company is bringing a new tablet, speaker and green MateBook X Pro laptop to Europe. And Trump reportedly accuses British Prime Minister Boris Johnson of “betrayal” in a heated phone call about Huawei 5G decision.

Feb. 18, 2020: A judge dismisses a Huawei suit challenging the US government’s equipment ban.

Feb. 13, 2020: The Justice Department charges Huawei with racketeering and theft of trade secrets.

Feb. 11, 2020: The US reportedly finds Huawei has backdoor access to mobile networks globally.

Feb. 7, 2020: Attorney General William Barr suggests that US take a “controlling stake” in Ericsson or Nokia to counter Huawei.

Jan. 28, 2020: UK gives Huawei the green light to build the country’s non-core 5G network, with some limitations, while an analyst says Huawei is the world’s top 5G phone vendor.

Jan. 24, 2020: The Pentagon reportedly blocked even tighter rules on US companies selling to Huawei.

Jan. 20, 2020: Huawei will use TomTom’s navigation software and data after losing Google Maps.

Jan. 14, 2020: The US presses British officials to block Huawei from its 5G network, and US senators propose over $1B in 5G subsidies to counter Huawei dominance.

Jan. 9, 2020: Sen. Tom Cotton unveils a bill to stop the US from sharing intelligence with countries that use Huawei 5G technology.

Dec. 17, 2019:  Huawei will launch the P40 Pro in March without Google support, and Spain’sTelefonica says it’ll drastically reduce Huawei gear use for its core 5G network.

Dec. 8, 2019: Huawei will bring Harmony OS to more products next year, but not phones.

Dec. 3, 2019: Huawei cut US components out of Mate 30 in wake of Trump’s ban, and US judge disqualifies Huawei lawyer from fraud and sanctions case, citing conflict of interest.

Nov. 29, 2019: Huawei will apparently fight the FCC decision to exclude it from federal subsidies.

Nov. 26, 2019: Huawei and Samsung see jump in phone sales for third quarter, while others see decline.

Nov. 22, 2019: The FCC bars Huawei and ZTE from billions in federal subsidies, while senators want Trump to halt licenses that let US companies sell to Huawei.

Nov. 12, 2019: Huawei is reportedly giving staff $286 million in bonuses for sticking through US ban.

Nov. 7, 2019: Huawei founder says the company’s coping fine with the US trade ban, but stresses the need for open collaboration.

Nov. 5, 2019: Hungary will reportedly work with Huawei in building its 5G network.

Oct. 16, 2019: Huawei sold a whole bunch of phones despite the US ban, while a Mate X unboxing video hints at the foldable phone’s imminent release. Also, Germany caused an uproar with draft network security rules that would let Huawei work on its 5G networks.

Oct. 9, 2019: Trump is reportedly ready to approve sales of US goods to Huawei.

Sept. 26, 2019: Huawei apparently is making 5G base stations without US parts, and Norway says it won’t ban the company from its 5G rollout.

Sept. 18, 2019: Huawei urges Australia to embrace Chinese products during its “explosion of innovation,” and its Mate 30 event lineup apparently leaks a day early.

Sept. 12, 2019: Huawei’s founder is ready to sell his company’s 5G tech to a Western buyer. Separately, Huawei is selling MateBook laptops with Linux preinstalled in China.

Sept. 10, 2019: Huawei drops a lawsuit against the US government after its telecom equipment is returned.

Sept. 9, 2019: Microsoft President Brad Smith wants the US government to offer more evidence to back up its Huawei ban. Also, US prosecutors charge a Chinese professor with fraud for allegedly taking a California company’s tech for Huawei’s benefit.

Sept. 3, 2019: Huawei accuses US of using cyberattacks and threats to disrupt its business. It also intends to give universities $300 million annually despite the US trade ban.

Aug 27, 2019: US reportedly receives more than 130 requests for Huawei licenses, but none have been issued yet. Also, new Huawei phones reportedly won’t be able to use Android.

Aug. 23, 2019: Huawei reckons the US ban will cost its phone division $10 billion, and sheds 100 Australian jobs after being banned from country’s 5G rollout.

Aug. 18, 2019: Trump says he doesn’t want to do business with Huawei due to the “national security threat” it represents.

Aug. 15, 2019: Huawei pushes back the launch of its Mate X again, and might be working on its own version of Google Maps.

Aug. 9, 2019: Huawei unveils its Android replacement “Harmony,” while Trump says the US won’t do business with Huawei.

July 29, 2019: Huawei and Google were reportedly working on a smart speaker before ban.

July 15, 2019: Canada may wait until after October elections to decide on Huawei ban, while the US will reportedly let Huawei sell to companies within weeks. Also, Huawei reportedly plans major layoffs at its US research labs.

July 9, 2019: US will allow licensed sales to Huawei, but it remains blacklisted.

July 7, 2019: Huawei CEO says its HongMeng OS alternative is ‘likely’ faster than Android, but needs its own app store.

July 4, 2019: US government tries to get Huawei lawsuit thrown out.

June 29, 2019: Trump decides to lift some restrictions on US companies selling to Huawei.

June 27, 2019: Huawei employees worked on Chinese military research projects, according to a report from Bloomberg.

June 25, 2019: US companies are reportedly bypassing the Trump ban on sales to Huawei, while FedEx is suing the Commerce Department over the diversion of Huawei packages.

June 24, 2019: Huawei says it’ll increase its 5G investment in spite of US ban, while attorneys for its imprisoned CFO have asked for the US extradition request to be withdrawn. Also, an FCC commissioner wants Huawei gear out of US networks, and the Trump administration reportedly is thinking about requiring domestic 5G equipment to be made outside China.

June 21, 2019: Huawei unveils a trio of new Nova 5 phones in China as US tensions simmer, and its Mate X foldable phone will reportedly launch by September. The US also blacklists five more Chinese tech companies.

June 12, 2019: Huawei reportedly moves to trademark its own OS, and apparently chases Verizon for $1B in patent licensing fees.

June 10, 2019: Huawei reportedly asks app developers to publish on its AppGallery store, and a White House official apparently wants to delay the US government’s Huawei ban.

June 2, 2019: Huawei reportedly strips back production of phones amid US crackdown.

May 30, 2019: Huawei membership restored by SD Association and Wi-Fi Alliance, while it quietly launches its 5G lab in the shadow of the US ban. Also, its wearables shipments quadruple in first quarter.

May 29, 2019: Huawei asks court to rule US ban unconstitutional.

May 28, 2019: Huawei reportedly plans to bring OS to China later this year, internationally in 2020.

May 26, 2019: Huawei’s founder says he’d “be the first to protest” if China retaliated against Apple.

May 24, 2019: Huawei’s operating system may be called “Hongmeng,” while Amazon Japan reportedly stops selling its devices.

May 23, 2019: US reportedly accuses Huawei of lying about Chinese ties.

May 21, 2019: Huawei reportedly wants its app store to compete with Google’s.

May 20, 2019: Huawei gets a temporary reprieve from the US trade ban, prompting Google to revive work temporarily.

May 19, 2019: Google cuts off Huawei phones from future Android updates.

May 16, 2019: Huawei says US ban will ‘significantly harm’ American jobs and companies.

May 15, 2019: Trump effectively bans Huawei with a national security order.

May 8, 2019: 5G rollout may face a delay in UK over Huawei investigations.

May 3, 2019: Countries draft 5G security proposals as the US warns again of Huawei’s threat.

May 2, 2019: A Huawei leak prompts the sacking of UK defense minister Gavin Williamson.

April 30, 2019: Vodafone found hidden backdoors in Huawei equipment, according to a report.

April 9, 2019: The US reportedly no longer demands a Huawei ban in Germany.

April 4, 2019: Huawei sets new goals to overtake Samsung and Apple, and MIT severs links with Huawei and ZTE due to US investigations.

March 29, 2019: Huawei slams US for having “a loser’s attitude” because its tech can’t compete.

March 19, 2019: Angela Merkel pushes back against US pressure to bar Huawei from Germany’s 5G rollout.

March 15, 2019: Huawei’s CFO wanted to quit before arrest, according to the company’s founder.

March 14, 2019: Huawei is developing its own OS in case it can’t use Android or Windows, report says.

March 8, 2019: Huawei sues the US government over its equipment ban.

March 1, 2019: An extradition hearing for Huawei’s CFO gets the go-ahead from Canada, and the US warns the Philippines against using Huawei 5G gear.

Feb. 20-21, 2019: Ren Zhengfei says that the arrest of his daughter, the company’s CFO, was “politically motivated and that the US treats 5G like “military” tech.

Feb. 17, 2019: The UK reportedly concludes that using Huawei in 5G is a manageable risk.

Feb. 4, 2019: A report says the FBI raided a Huawei lab and set up a CES sting. Also, two of the company’s staff were expelled from Denmark after a work permit inspection.