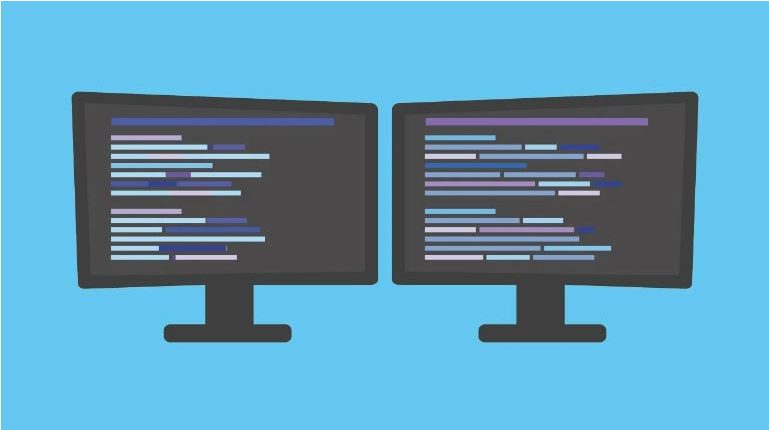 These days, setting up dual monitors is easy, but don’t just plug in a second display and call it a day. Once everything is set up, there is more you can do to make that multi-monitor setup work for you.

1. Line Up the Displays

If your monitors are the same make and model, you can probably skip this section—once you plug them both in, Windows should automatically extend your desktop horizontally. Just adjust each monitor’s stand so they line up perfectly, and you’re off to the races.

If you have two different monitors, however, you may need to do a bit more work to make them play nicely with each other. For example, maybe you’re plugging your laptop into an external display and using them side by side. This will produce some weird behaviors, but it’s easy to fix.

Right-click on the desktop and choose Display Settings. From this page, Windows 10 and Windows 11 users should be able to drag the rectangles around so they match the monitors’ orientation on the desktop; say, if one is slightly lower than the other. You may have to do a little trial and error to get them lined up properly.

Mac users should open System Preferences > Displays, then click the Arrangement tab to align the monitors in a way that makes the most sense for your setup.

If you have a 4K monitor next to a 1080p monitor, open Display Settings and scroll down to the Scale and layout section to adjust the resolution of each monitor and its scaling. So, if one monitor is 4K and the other is 1080p, you can set each monitor to its native resolution but increase the scaling on the higher-resolution one, so your windows appear the same size on each.

To go even further, you can use each monitors’ built-in settings to adjust brightness and color to make them match as closely as possible. Once you’re done tweaking all these settings, your monitors should match up much more closely, making it easier and more pleasant to move windows between them.

If you need to adjust the scaling on a Mac, open System Preferences > Displays and a secondary settings menu for your monitor will open. From this menu, select Scaled and choose a new resolution preset. You can also adjust brightness and color from the Display menu.

By default, Windows will extend your taskbar to both monitors, which can be handy—though you can customize it a bit further to your liking. Right-click on the taskbar and choose Taskbar Settings. There are a lot of useful options here for Windows 10 users, but if you scroll down to the Multiple Displays section, you’ll see what we’re interested in.

The first switch removes the taskbar from your secondary display. This is how I personally choose to use multiple monitors, since it puts all my shortcuts in one place.

If you choose to keep it extended across both displays, though, you can decide where you want individual icons to appear: on both monitors, on the main taskbar and the taskbar where that app’s window is open, or on only the app’s active monitor. You can also choose if you want the taskbar buttons to have labels, Windows XP-style.

On Windows 11, open the same Taskbar Settings menu, then open the Taskbar behaviors drop-down menu for options on showing the taskbar on all displays and where apps should be displayed.

If you have two monitors, you can run your laptop with the lid closed. Windows users can open the Start menu and do a search for the word “Lid.” Click Change what closing the lid does to open the Control Panel and view power options for your laptop under certain circumstances.

For the When I close the lid option, change the drop-down menu under Plugged in to Do nothing. Click Save changes to make it stick. This now means you can close your laptop’s lid and the computer will continue to run, allowing you to see everything from your monitors.

Mac users can do the same thing under System Preferences > Battery and the Power Adapter tab. Pull the Turn display off after slider all the way to the right so it’s at Never. You should also check the box next to Prevent computer from sleeping automatically when the display is off. Now you can close the laptop and still use it.

Once you have a wallpaper (or collection of wallpapers) you like, right-click the desktop and choose Personalize (then click Background in Windows 11). Browse to the image or folder in question and choose Span to fill the space across all your displays.

Mac users can right-click the desktop and select Change Desktop Background to open the Desktop & Screen Saver menu. Click the plus (+) button in the bottom-left corner in the menu that appears to upload your own background.

The beauty of multiple monitors—especially when compared with ultrawide and superwide monitors—is the ability to “dock” windows to the edges of each display, making it easy to view tons of windows at once. While you can always drag your windows around and resize them with the mouse, that’s arduous and time consuming.

That’s why there are a few shortcuts for Windows 10 and Windows 11 that can help (with or without multiple monitors), including:

Windows 11 has an even better multitasking feature called Snap Layouts, which allows you to arrange certain windows (like a web browser) into different alignments on the screen. Mac users have Mission Control, where you press F3 to quickly view all open windows and switch to the one you want. Additional settings can be found under System Preferences > Mission Control.

While triple monitors allow you to span the game across all your displays—using the Nvidia Surround or AMD Eyefininity settings—dual monitors don’t work as well for super-wide gaming, since your crosshair would be right on the monitor bezels. You can, however, game on one monitor while having a walkthrough, chat window, or GPU monitor up on the other.

Most games can work this way without hiccups, but you may find that, in some cases, your cursor can “drift” onto the other monitor while you’re still in-game. I’ve had this happen with multiple titles, including The Witcher 3, Doom, and Metro: Last Light.

Thankfully, one enterprising developer set out to fix this problem with a tool called Cursor Lock(Opens in a new window), and in my experience, it works beautifully. Start the program, check the Open Program box, and then enter the path to the game’s EXE file. This will create a new shortcut for you to use.

Now, when you launch the game using this shortcut, your cursor should stay “locked” to the game window unless you Alt + Tab out of it. If that doesn’t work, the game in question may need a few extra options, which you can learn about in Cursor Lock’s video tutorial(Opens in a new window).

8. Do Even More With DisplayFusion

If, after all that, you’re still left wanting more, a third-party tool called DisplayFusion(Opens in a new window) was designed with multiple monitors in mind. With DisplayFusion running in your system tray, you can gain more control over your wallpapers, create custom keyboard shortcuts, align windows to the edges of any display, or automatically dim the inactive monitor so you don’t get distracted.

Seriously, this program is chock full of useful options, so download the free version to try it out for yourself. It’s a bit more limited in features(Opens in a new window) than the paid version, but if you like what you see, you can buy a license for $29. I purchased it eight years ago and haven’t regretted it for a second. Mac users have a free and open-source option called Rectangle(Opens in a new window).