Skip to content
Home  /  Emerging Technology & News  /  Microsoft Teams is getting avatars, launching in VR and AR next year 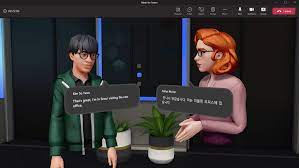 Teams is getting metaverse-ified, with hopes of being the Zoom for VR.

There really isn’t a “Zoom for VR” yet, despite many companies working on offering virtual meeting rooms. The mainstream work tools most people use haven’t made the leap. Facebook, which is trying to push its entire company into the metaverse, doesn’t have one yet. Meanwhile, Microsoft is finally pushing Teams into a VR/AR-bridged tool that’s arriving in beta form in the first half of 2022.

The cross-device upgrade for laptops, phones, VR and Microsoft’s Hololens headsets makes its avatars the central focus, along with a set of immersive meeting spaces that will fold in Microsoft Office 365 apps and services. It sounds like it could be, in some ways, like what Facebook’s Horizon Workrooms has attempted to be for virtual work meetings.

Microsoft Teams started getting reimagined during the pandemic: A 2020 experimental add-on called Together Mode rearranged participants into classrooms and auditoriums, something like a translation of the spirit of VR into a 2D videoconferencing app. The improvements were made quickly, based on a realization on Microsoft’s part that the world wasn’t going to be spending most of its time in VR headsets doing remote work anytime soon and that Zoom fatigue remains very real.

Microsoft’s next step in Teams is taking those avatars and opening up more control for people over their over personal image and identity. The avatars will work in Teams’ 2D modes as an alternative to showing your real face on camera, but they can express reactions and emotions. They’ll also work in 3D immersive spaces that will cross between VR, AR and 2D screens.

Nicole Herskowitz, general manager of Microsoft Teams, told CNET that the company’s research via its internal Human Factors Lab found 85% of people using avatars felt either “very or somewhat present” in meetings and also felt that 75% of other people using avatars seemed either “very or somewhat present.” That encouraged Microsoft to think that avatars could be realistic stand-ins during group meetings, adding to the current either/or options of having a camera either on or off. The first version of the avatars will be animated by AI that interprets voice cues, but will lean on cameras and hand tracking after that. Microsoft suggests that VR and AR headsets with more cameras and movement sensors could also help animate more expressive avatars as the Teams app evolves.

The avatars aren’t the same as the ones Microsoft already uses in AltspaceVR, though: These avatars look a little more lifelike, less overtly cartoonish, but still clearly not at all photorealistic. The immersive spaces available when the preview launches next year will be a limited set, but businesses could potentially build out their own virtual office environments eventually.

Microsoft points to an early partner, Accenture, as an example of where this vision is going. Accenture has a VR-capable set of virtual meeting spaces for remote workers to log in to, which double as company meeting spots and attempts at more casual virtual spaces, like home versions of office lounge rooms.

Microsoft unveiled its cross-device Mesh platform for AR, VR, mobile and PCs earlier this year. With Mesh, Microsoft is targeting exactly the bridge between headsets, phones and laptops that Mark Zuckerberg’s metaverse-focused Meta company is also aiming for, and an area where companies like Apple might soon start making moves. Cross-device and avatar-focused communication will be a hot topic for a lot of companies over the next year, as visions for a common metaverse start drawing attention where traditional VR/AR conversations were previously happening.

Credits: Scott Stein
Source: CNet.com
Featured Image: Microsoft Teams is getting avatars and will work in VR next year. Here’s what meetings may look like. | Microsoft