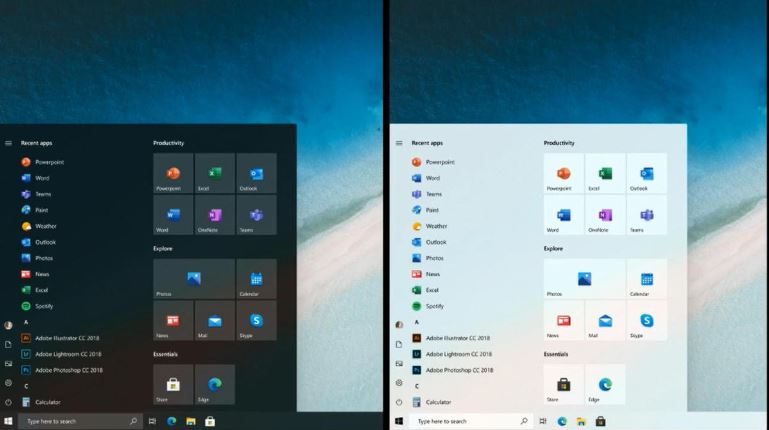 Microsoft looks to usher out Windows 10’s Live Tiles for a Start menu that showcases its new Fluent Design icons.

Microsoft has given a sneak peek at a new Windows 10 Start Menu design that lets the company’s new batch of icons shine without the solid-color Live Tile blocks familiar to users.

Revealed by the company’s Windows Insider team and designers, the new concept shows what the company is planning for a future version of Windows 10. The new Start Menu ditches Live Tiles and helps emphasize Microsoft’s new Fluent Design app logos, which are intended to create a consistent entry point to its apps for Windows 10, iOS, and Android.

However, the demonstration suggests Microsoft could soon diverge from the original concept of Live Tiles introduced in Window 10 in 2015.

It would also bring the desktop interface in line with Microsoft’s dual-screen Windows 10X Start Menu, which eschews Live Tiles for app icons.

Microsoft currently plans to lets users turn off Live Tiles to reveal the new icon interface. The idea is to present a visually unified design for the Start Menu compared with what Microsoft says was “a somewhat chaotic color”. It also wants to introduce the change without annoying Windows 10 users who like Live Tiles.

The new Start Menu would introduce a more “acrylic, fluent theme” compared with the bright, solid colors that aren’t consistent with its Fluent Design System.

The design change is meant to offer better support for system-wide light and dark modes, offering users a cleaner design in either mode.

Microsoft has been toying with the idea of removing Live Tiles for at least a year, well before it revealed Windows 10X for the Surface Neo and other dual-screen Windows devices.

In Microsoft’s before-and-after demonstration, it’s clear why the company’s designers want to veer away from solid blocks of color.

Fluent Design icons for apps like Edge, Word, and Outlook are overshadowed by each tile’s dominant colors. Without the tile, each app’s icon stands out and is more obvious to users.

“Flat, monochrome icons look great in context of colorful tiles, but as more icon styles enter the ecosystem, this approach needs to evolve,” she wrote.

“When icons in the taskbar and Start menu are different styles, it creates more cognitive load to scan and find applications.”