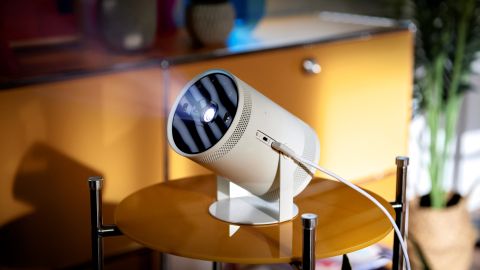 But can it deliver a great performance?

Samsung will soon let us take its home cinema experience on the go – thanks to the newly announced The Freestyle projector.

Announced as part of its CES 2022 lineup, The Freestyle aims to let us enjoy everything we love about Samsung’s tech whether we’re at home or on an outdoor adventure – though from what we’ve seen it might struggle to deliver.

As portable projectors go, The Freestyle ticks plenty of boxes. The whole device weighs less than 2lbs (under 1Kg), so it should be easy enough to take with you on the go, and its auto-leveling features and adjustable stand should mean you won’t struggle to set up a cinema wherever you are.

On top of that, this all-in-one device comes with a built-in 360-degree sound system – so there’ll be no need to carry around additional speakers.

The only major downside so far is that the projector requires you purchase optional add-ons to make it a device you can truly use anywhere. This includes a portable USB-C battery so you aren’t reliant on needing to find a plug socket and a waterproof case to keep The Freestyle dry in the outdoors.

Additionally, while the projector boasts the ability to plug into any standard E26 lightbulb socket so you can easily hang from a wall or ceiling in your home you’ll need to purchase an additional base accessory to make this possible.

We’re also skeptical of Samsung’s comparisons to its smart TVs. While we haven’t had the chance to try out this projector yet, our experiences with others like it lead us to believe we might be getting an inferior performance compared to what we’ve seen from Samsung before.

For one thing, the image we expect to see will be nowhere near as bright nor colorful as a QLED or Neo-QLED display, and it will likely be a step down from what we saw with Samsung’s The Premiere LSP9T projector too.

That’s because The Freestyle is a long throw projector rather than an ultra-short throw design like the Premiere, which means you’ll need more space to use The Freestyle and the image it produces won’t be as bright.

As a result, where the Premiere could handle some ambient light and still deliver a splendid image we expect The Freestyle will require a much darker viewing environment and may struggle to provide clarity in darker scenes.

Its audio performance is likely to take a few knocks, too. The small size won’t leave much room to include speakers that would make an audiophile proud.

Lastly, the image size is a tad smaller than we’d expect. Long throw projectors tend to boast a 120-inch maximum size rather than just the 100-inches Samsung’s The Freestyle can deliver. While this is still massive it’s an overall reduction of around 30% compared to what’s already available on the market.

However, Samsung has surprised us before. The Premiere LSP9T performs much better than we expected. Until we try out The Freestyle, it’s hard to say for sure if it will be a disappointment, especially since Samsung has yet to reveal how much its projector will cost.

For now, we’ll have to wait and see what Samsung has in store for us. As we learn more about The Freestyle, including its price and release date, we’ll be sure to keep you up to date.