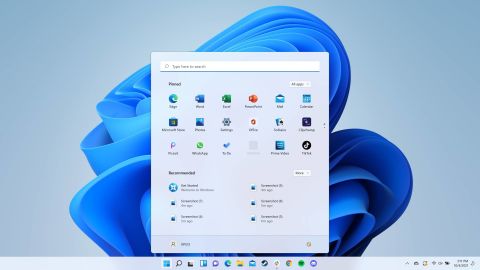 A handful of new features keep Windows feeling fresh, but don’t stress if you can’t get the update on day one.

Sorry, no Spinal Tap “goes to 11” puns here. That’s mostly because Windows 11 feels more like Windows 10.5 than a generational leap — not that there’s really anything wrong with it. An operating system, whether it’s MacOS on your MacBook or Google’s Wear OS on your smartwatch, gets better the more transparent it is to the end user. And that end user is you, sitting in front of a laptop keyboard or tapping on a phone screen.

But maybe the shift from Windows 10 to Windows 11 feels subtle because the jump from Windows 8 to Windows 10 was so gigantic. Big enough for Microsoft to skip an entire version number, even. That generation was all about righting a ship that had gone somewhat off-course, leaning too far into tablet territory, trying to convince everyone that Windows laptops and tablets were as cool as iPads. They’re not, and that’s OK: I work on a Windows machine, I do plenty of PC gaming on one, but when I flip through news headlines in bed at night, it’s on an iPad.

Windows 10 started out with favorable reviews and has remained in everyone’s good graces precisely because it got out of the way of whatever you were doing instead of trying to force its ideas on you. But more importantly, it was free* — which includes an asterisk to indicate it was generally available as a no-cost upgrade to anyone with a non-ancient PC.

Before 2015, Windows upgrades either cost some money, or if you bought a new laptop or desktop, the latest OS just came preinstalled. Apple’s OS X moved to a similar free-to-upgrade model around the same time. Except for system builders, the idea of paying separately for a computer operating system is basically extinct. That’s a big change from when you had to hand over $120 to Microsoft for the privilege of upgrading from Windows 7 to Windows 8.

The list of compatible PCs is frankly a little narrower than I would have expected. The base requirements are a 64-bit processor, 4GB of memory, 64GB of storage, UEFI secure boot and TPM (trusted platform module) 2.0. It’s that last one that gets tricky for some people, especially on cheaper laptops. If you’ve got a CPU older than a 7th-gen Intel Core series (we’re up to 11th-gen now), you might be in trouble. If you want to check, use the Microsoft PC Health Check app. There are workarounds for installing Windows 11 anyway, but proceed with those at your own risk.

If there’s one thing that immediately stands out about Windows 11, it’s this: The start menu and taskbar are now centered on the bottom of the screen, rather than aligned to the left by default. Yes, that’s the single biggest visual and interface change you’re going to see on day one. Sure, there’s plenty more going on underneath, but it feels like this UI shift is there mainly to let you know there’s something new and different going on under the surface.

And there is a good deal going on in Windows 11. For casual or mainstream users, you’re unlikely to notice much of it, though there are some standout upgrades worth noting.

Get some Android in your Windows

One of the big selling points of Chromebooks, which run Google’s ChromeOS, is that most Chromebooks can run just about any Android app, from phone-centric favorites like Instagram to mobile games. That breaks Chromebooks out from being restricted to just cloud-based apps and frankly adds a lot of functionality to your $300 or so Chromebook.

Microsoft is adding similar functionality to Windows 11, both to compete with Chromebooks and to forge greater bonds between Windows PC users and Android phone users, just as Macs and iPhones are inexorably bound.

But… that feature is not included with the launch version of Windows 11. It’s going to be previewed sometime in the coming months, so I wouldn’t expect it to be added as a fully baked feature until some time in 2022.

That’s a shame, because easy access to Android apps was probably going to be the biggest single practical change in Windows 11 for most people. Sure, there are plenty of other ways to do this, using an app like Bluestacks or even the Your Phone app from Microsoft, but it’s not simple enough for everyday users.

Easily organizing a bunch of open windows so you can see and access them when you want — and hide them when you don’t — is handy once you get the hang of it. The ability to snap windows into preset slots on the desktop has been around for a while now, but the new Snap Groups and Snap Layouts offer a few new ways to wrangle your windows.

By hovering over the “maximize” button on the top right corner of most windows, you’ll get a pop-up showing a bunch of layout options. Minimize these apps, and you can pop them all back up again in the same exact spots, by hovering over any of the snapped window icons in the task bar.

But…not every app I tried allowed me to snap its window. Web browsers, system tools and many other random programs did, but programs such as Photoshop and Steam did not (hovering over their maximize buttons didn’t offer the snapping options pop-up menu).

If you have a gigantic monitor, use multiple monitors or need several thinly sliced web browser windows open at once, it can be handy. On a laptop screen, you’re generally not looking at one or maybe two windows at once.

Multiple desktops are a common MacOS feature, and a good way to keep multiple facets of your digital life organized. For example, you can keep all your work apps — email programs, browsers, video conference apps, etc. — on one desktop, and all your gaming apps on another. Like on a Mac, you hot-swap between them — it’s really just a change in how your open apps are visualized.

You can actually do that in Windows 10 as well, but it’s a pain. In Windows 11, Desktops have their own taskbar icon by default, and creating and organizing multiple desktops is even easier than on a Mac, which is not something you’ll hear very often.

Every gadget-maker loves widgets, defined in consumer tech terms as small icon-like apps that usually sit in a group somewhere on your device’s UI. Usually it’s useful little things like the weather, stock prices, your latest emails or calendar items, or a small newsfeed. Your iPhone and iPad have them, Android devices have them, Macs have them (under the usually hidden Notification Bar on the right side of the screen). Windows used to have built-in widgets, too. They were called Gadgets and died along with Windows 7.

Now they’re back. On the plus side, with its own taskbar button, the new widgets are easy to find. Hit the button and a semi-transparent panel pops out from the left edge of the screen. It has, by default, widgets for weather, your Outlook calendar, photos you may have in OneDrive, a To Do list and a few others. You can customize the list a bit, but there are not too many options for now. Below that is a newsfeed that looks like it’s curated by the same people who do the news curating on the home screen for the Microsoft Edge browser. You can hide stories from any specific outlet by clicking on a menu icon in the news section or hit a “manage your interests” button to customize the feed, but by default, it’s pretty basic. Lots of sports, Fox News and celeb gossip.

Do you use Microsoft Teams instead of Zoom, Facetime or Google Hangouts? You’ll be able to get to it and launch it a little faster, because it’s fully integrated into Windows 11 now. I’ve never been invited to a Microsoft Teams meeting, except by people who work for Microsoft.

It’s interesting to note that Windows users can now pop into Facetime meetings with the latest iOS “invite anyone” feature. Clearly there’s a lot of competition for video meeting mindshare (faceshare?).

Other quality of life improvements

As I’m often referring to system tools, settings menus or other on-screen things in my writing, I take a lot of screen shots. On a Mac, that’s easy — Shift + Command + 4. In Windows, well, it’s never been quite that simple. The built-in Snipping tool is, however, slightly less annoying under Windows 11. Now you can take a snip by hitting Windows + Shift + S, although it copies the screenshot to the clipboard, it doesn’t automatically save the image, you’ll still have to do that manually.

The Edge browser now has a safe Kids Mode that’s easy to access by clicking on your profile in the upper right corner, and can be customized for different age groups.

Auto HDR — a feature that moved over from the Xbox Series X — give non-HDR (high dynamic range) games a boost to lighting, brightness and contrast for a more HDR-like look.

I’m waiting for a revamped version of the Microsoft app store, which will allow for third-party services like game stores and web browsers. The Opera browser is available now, the Epic Games storefront is expected soon. No word on other browsers like Firefox or Chrome, or the very popular Steam PC game storefront. Eventual Android app support will come, at least initially, from an Amazon-branded Android app store, rather than from Google Play.

Who should get Windows 11?

Despite my lukewarm embrace of the new Windows OS, there’s not a compelling reason to skip it. That’s because, any new PC OS launches in an unfinished state, and the best improvements and most polished versions come later, from Windows 8.1 to Windows 10 Creators Edition.

I’ve used various preview builds of Windows 11 across multiple PCs for months, along with the final release build, and it’s been fine, almost completely trouble-free, and I’ve never once thought about rolling back to Windows 10.

That said, Microsoft’s gonna Microsoft sometimes. Some long-term Windows irritations have stuck around. When setting up the OS for the first time, there are still plenty data-sharing and ad-personalization checkboxes to uncheck, and the built-in Edge browser still buries the default search engine settings (to switch the default search engine from Bing to, say, Google) several submenus deep. Switching which apps do what by default is also more complex now; you literally have to assign each file type — .htm, .html, etc. — one by one. Hopefully this will get streamlined at some point.

If you’re going to buy a new laptop or desktop at pretty much any point after today, it’ll probably come with Windows 11 preinstalled. In that case, you don’t have to make a conscious decision, just go with the flow. If you have a current-gen Windows laptop, tablet or desktop, you’ll be able to download and install Windows 11 either now or at some point in the near future. It’s being rolled out slowly, probably to avoid a huge rush of same-day downloading.

As a general rule of thumb, I always suggest that you don’t jump up and be the first person on the block to download a new OS update, whether it’s for your laptop, phone or tablet. Issues will inevitably pop up, if only because of the tremendous breadth of hardware configurations and accessories, from printers to mice to VR headsets, that need to work right.

That said, testing for Windows 11 has been extensive, and the main prerelease issues so fara have been with how icons are displayed, some menu weirdness and occasional File Explorer problems.

My final word on the subject, for now: If you want to try and download/install Windows 11 on day one, go for it. If you want to wait a few weeks (or a few months), that’s fine, too.