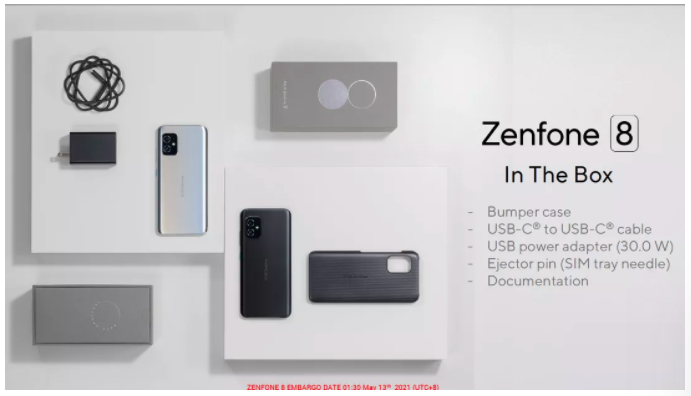 Asus managed to cram a big battery, a top-of-the-line-processor and a bunch of other goodies into what it calls the “ultimate compact phone.”

Asus is betting a small phone will make a big impact. It’s billing its new midrange Zenfone 8 as the “ultimate compact phone.” The Zenfone 8 has a crisp 5.9-inch AMOLED display, respectable battery life, dependable cameras, stereo speakers, and powerful internals that by some measures rivals the $1,200 Galaxy S21 Ultra’s performance. All this is crammed into a lightweight and slender chassis, making it one of the most compact 5G phones around.

Based on my experience with the Zenfone 8, Asus delivered on exactly what it set out to do, guided by its design mantra of creating something that’s “big on performance, compact in size.” The Zenfone 8 is clear about what it is and what it is not.

Remember the Zenfone 7 and 7 Pro? The two phones, released by Asus last year, made headlines for their cool camera module that flipped over the top of the phone.

Compared to Asus’ bold effort last year with the Zenfone 7 lineup, the Zenfone 8 feels like an especially safe play, even though I recognize the effort Asus made to make a slender yet powerful phone. To be clear, Asus didn’t get rid of the cool flipping camera entirely — the Zenfone 8 Flip has an upgraded version. That device will likely not see a US release, however, and I was sent the base version for review.

This year, the camera bump does not flip. Like many phones, it’s in a fixed position on the upper left corner of the device, housing two lenses, a flashlight and a microphone. There’s also some subtle Asus branding slapped onto the device’s frosted glass rear.

On the front, you’ll find a crisp 5.9-inch AMOLED screen with relatively chunky bezels for a phone in 2021, and an inconspicuous punch-hole camera on the upper right. On the right side, there’s a volume rocker and a power button that can be customized to access system features and apps. I left mine on default settings, which launches Google Assistant when you double press the power button. On the bottom there’s a dual-SIM card slot, a notification light and a headphone jack.

When I reflect on this phone, another word that comes to mind is durability. Zenfone 8’s IP68 rating means its water and dust proof. Plus, this phone relies on the most resilient Gorilla Glass Victus shielding from Corning, to protect it from shattering when dropped.

The Zenfone 8 has a flat 5.92-inch OLED panel from Samsung. I was able to use it in various lighting scenarios thanks in part to its high peak brightness of 1,110 nits. In addition, it has full quad HD plus resolution (2,400×1,080 pixels) and 120Hz display, which can be dialed back to 90Hz or 60Hz to preserve battery life. Most phones have refresh rates of 60Hz, which means the screen refreshes 60 times in a second. 120Hz displays can look a lot smoother when scrolling through webpages by comparison. That’s the same speed seen across Samsung’s latest Galaxy S21 lineup, including the $1,200 (£1,149, AU$1,849) Galaxy S21 Ultra, as well as Xiaomi‘s superluxe flagship, the Mi 11 Ultra.

The display was also ultra-responsive, with a 240HZ touch-sampling rate and 1-millisecond response time. There’s also an in-screen fingerprint reader. Taking all this into consideration, the Zenfone 8 has a fantastic display for its price range. And even though it’s not a WQHD display, I think it’s one of the Zenfone 8’s most attractive features.

In general, the camera produced solid images whether I was clicking away in bright, indoor, and even dark environments. Because there’s no telephoto camera on this device, all of its zoom is digital, and that digital zoom maxes out at 8x zoom. Note also that there’s no zoom capability when you’re taking 64-megapixel photos. The Zenfone 8 also shoots 8K video.

On the spectrum of smartphone cameras, this isn’t the best camera I’ve ever used (not even close) nor is it the best phone camera for its price range. But I think that’s forgivable, because the camera isn’t the main selling point of the Zenfone 8, nor is it marketed to be. And as I said earlier, my pictures were respectable in most lighting environments. Here are the cameras in action.

The Zenfone 8 battery lasted me roughly 25 to 26 hours of what I’d describe as medium use. That means I didn’t use the phone for power-intensive games. I used it for things like reading the news or emails, making a few short phone and video calls, scrolling through my social media feeds, taking photos and uploading them to the cloud, watching YouTube videos, scrolling through my social media feeds again and running one benchmark test.

I’d expect less than a day’s worth of battery life when you’re gaming or using the phone for more extensive tasks. But if you want the charge to last longer, you can take advantage of a suite of battery care tools tucked away in the settings menu.

Zenfone 8 has five different system modes that lets you optimize battery life depending on your needs. For demanding tasks, you can crank the system all the way up to High Performance Mode. When juice is running low, the phone intelligently switches to “ultra durable” mode to preserve as much power as possible. In that setting, the device switches to dark mode. When I was running on 1% battery life, the phone lasted me some 30 minutes, before it died. And if you can even fine-tune system performance yourself on Advance mode, and increase the system performance for things like CPU, GPU and RAM performance.

When I eventually ran out of juice, I used the bundled 30-watt charger to replenish the 4,000-mAh battery. It took about an hour and 20 minutes to hit a full charge, but within an hour I’d hit 90%, and within just 30 minutes the battery refilled more than halfway.

Powering the Zenfone 5 is the top-of-the-line Qualcomm Snapdragon 888 chip, along with 12GB of RAM, or 16GB in the most expensive model with 256GB of storage. The pricier Samsung Galaxy S21 Ultra also has 16GB RAM.

But this isn’t just about the numbers. When I put the Zenfone 8 through its paces, it was peppy and fast, and handled everything I threw at it without a hitch. In 3D Mark benchmark tests, it performed somewhere between the iPhone 11 Pro and iPhone 12 lineup, signalling this phone is nothing short of a powerhouse. I wasn’t able to get an overall score for 3D Slingshot Unlimited, which didn’t output an overall score because the phone was apparently “too powerful.”

One thing to note: When I ran those tests, the phone got quite hot, and I noticed the same issue when charging the phone.