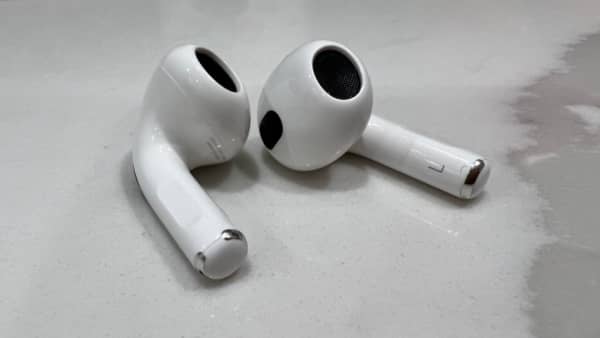 Apple’s new $179 AirPods with Spatial Audio launch this week. I’ve been testing a pair for several days and I think they’re going to be a big hit.

AirPods are part of Apple’s Wearables, Home and Accessories business which generated $8.7 billion revenue in the June quarter, up 40% from the year-ago quarter. That segment also includes the Apple Watch, HomePod and accessories sold at Apple Stores, but it’s now bigger than both the Mac and iPad businesses. According to a CounterPoint research estimate, Apple sold about 72.8 million AirPods in 2020.

AirPods looked goofy when they first launched, with their long stems, but quickly became popular due to their ease of use and good sound quality. Lots of companies, from Samsung to Google and Amazon, have shipped multiple versions of their own in-ear headphones.

The third-generation AirPods, called AirPods with Spatial Audio, launch Tuesday. They have a new smaller design and add features like spatial audio, which makes it sound like audio is coming from all around you, or from specific people in FaceTime calls. They’re a big upgrade from the second-generation AirPods and I think they’re going to sell really well.

Here’s what you need to know about the AirPods with Spatial Audio, which I’ll refer to as AirPods 3.

I really like the smaller design. The second-generation AirPods, which launched in 2019, and which Apple still sells for $129, still have the original longer stems. I just think the shorter arms look better.

The arms, like on the AirPods Pro, support force touch. This means you gently squeeze either bud to pause or play music, answer a call, and more. You can also long hold to access Siri if you don’t want to say “Hey Siri” out loud. Force touch works well.

I know a lot of folks who just don’t like the way rubber ear tips fit, and so have avoided the AirPods Pro either because they’re too expensive or because they prefer the plastic of regular AirPods. I think the AirPods Pro are more comfortable since I happen to like rubber ear tips, but I wore these for many hours on end without any issues. But what’s comfortable to me might not be comfortable to you. We all have different-sized ears.

They stayed in my ears while running and riding on my exercise bike. They’re resistant against rain and sweat, so you shouldn’t have to worry too much about them if they get wet.

And they sound way better, too, with nice rich deep bass and balanced audio. When it was quiet at home, I often thought that I was still wearing my $249 AirPods Pro. The sound is really similar, they just lack the noise-canceling in the AirPods Pro. The microphones also worked well during a few test calls with friends and colleagues. I was told I sounded clear.

The AirPods 3 support Spatial Audio like the AirPods Pro and AirPods Max. This can be really cool. If you’re speaking to multiple people on a FaceTime call, and one person is on the left of the screen and another is on the right, their voices will sound like they’re coming from the right and left into your earbuds. Also, if you’re watching a movie on your Mac, Apple TV, iPad or iPhone, it’ll sound like the audio is coming from that device, instead of just in stereo. It’s a wild effect and pretty fun. You can always turn it off if you don’t like it.

The AirPods 3 case design is still compact, though it’s more rectangular (and smaller) than the AirPods Pro case. I like that the case supports wireless charging and adds magnets so that it easily attaches to a MagSafe charger, which you might have for your iPhone 12 or iPhone 13. Apple lets you customize the AirPods case with your name, emoji, text and other things for free. On Tuesday, it will start doing that in stores for the first time, beginning with the Apple Fifth Avenue location in New York. Apple said it takes about 10 minutes.

The battery life is really good. Apple promises six hours of music before you have to return the AirPods to the case for another charge, and that’s close to what I was getting. It also says about four hours of talk time for calls. The case provides a total of 30 hours of charging. By comparison, the AirPods Pro have 4.5 hours of audio time before they need to be charged while the second-generation AirPods have five hours of listening time.

The third-generation AirPods have a small skin sensor inside that can detect when they’re in your ears. Apple says it’s more accurate than the proximity sensors in its other AirPods, so they should more reliably automatically turn off when they’re placed on a desk or not in your ears.

The AirPods 3 support Find My, the same way the AirPods Pro and Max do. So, if you lose the case, or even a single bud, you can open the Find My app on your iPhone or Mac or iPad and it’ll help direct you to them if they’re within range. It worked well.

They operate well with other Apple products. If you own an iPhone, a Mac, a Watch and an iPad, you can just plug in the AirPods and play music on that gadget and it’ll come right through to the AirPods. I love that I don’t have to pair them with every other Apple gadget.

There’s no noise cancelation. These are an open design, which means Apple isn’t trying to seal outside noise, and it makes and sells these for people who prefer that option. Still, $179 is more than some headphones that include noise-canceling, even if those cheaper options don’t sound as good.

And there are times when you might want noise-canceling. I prefer it for when I’m on the exercise bike, for example, because it gets really loud while I’m chugging along trying to climb hills. With the AirPods Pro, I can drown out the bike noise and focus on the music. I didn’t find this as much of an issue on runs, though, since I like to hear the world around me. And the design of the AirPods 3 still helped block wind noise.

I think these would be better looking if Apple could just get rid of the stems altogether, but they serve a purpose. The microphone is at the bottom, closer to your mouth. (It’s where the battery was in the first generation, too.) And extending the design in this way also helps cut down on the bulk of the AirPod in your ear.

Should you buy the AirPods 3?

The AirPods 3 are the best AirPods for most people right now. The sound is excellent, they’re comfortable, the battery life is great and the case has wireless charging.

But, if you want noise-cancellation, and have more money to spend, the AirPods Pro are still my favorite pair of AirPods on the market. I just prefer having the option to block out the noise when I’m exercising, when I’m walking in crowded places, or when I need to concentrate on writing.