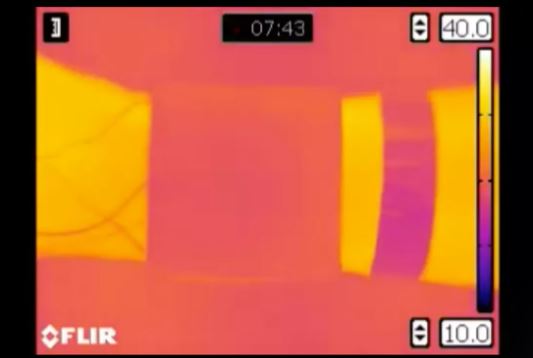 Thermal camouflage should be the next fashion trend.

Night vision goggles are apparently no match for a new wearable technology developed by researchers at the University of California, San Diego. The ambitious device aims to camouflage its wearer from heat-detecting sensors.

While current heat camouflage tech works by matching emitted heat levels to a predetermined ambient temperature, this new prototype uses a wax-like material that shifts from liquid to solid to match changing ambient temperatures. The technology can adapt to outside temperature changes in just minutes, while the inside remains comfortable to the wearer, according to a release Monday from UC San Diego.

The researchers’ next challenge is scaling up the technology. Their goal is to create a jacket with the technology built-in, but under current conditions, the garment would weigh more than 4 pounds and only function for an hour, according to the release. The team is exploring lighter, thinner materials so the garment could weigh two or three times less.

Until the new camouflage is available off-the-rack, you can see it in action here

Featured Image: The technology can adapt to outside temperature changes in just minutes | UC San Diego