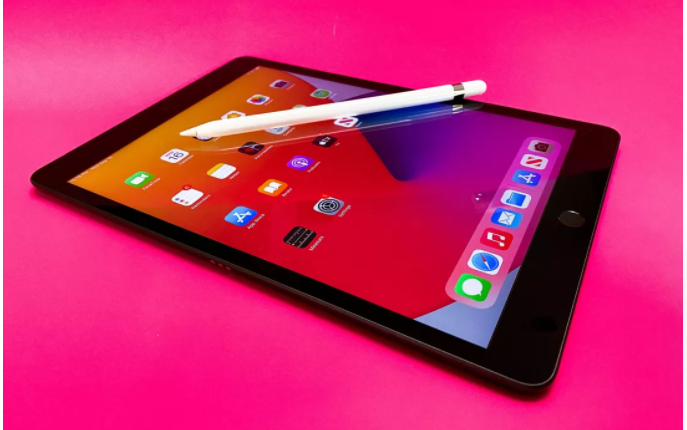 A better processor keeps the latest basic iPad as our go-to pick for families and anyone looking for an excellent affordable tablet.

The eighth-gen iPad feels familiar. It should be familiar: iPads don’t change much. But the world certainly has. My whole family is trapped at home, working and going to school; remote connections are our whole lives. And iPads and Chromebooks are everywhere in our house.

My kids connect to their classes through devices: one on a Chromebook, the younger one on an iPad. iPads aren’t ideal for school. They’re convenient in a pinch, but not all apps work well, and not all input tools do, either.

The basic iPad has been the “good enough” iPad for forever, while the Pro and Air have offered fancier features and better performance. This year, the iPad Air is getting a major revamp with a new processor, big display and USB-C, making it look much like an iPad Pro for less. But that new iPad Air starts at $599 (£579, AU$899). The new eighth-gen iPad I’ve been using, in the meantime, starts at $329 (£329, AU$499). Most stores will probably drop that to $300, and holiday sales could even bring it down further, if past years are any indication.

So what about this new 2020 entry-level iPad? It’s an iPad, just like the one before. But it’s a bit faster now. Whether you get one is basically the same question as before.

There’s not a lot to say about this new 10.2-inch iPad. It’s the same device as last year with one key improvement: Now it has an A12 processor instead of last year’s A10. That’s a big difference, and makes this a great time to consider the upgrade if you have an iPad that’s several years old. Last year’s basic iPad increased screen size and added a smart connector on the side, but it didn’t change the processor. Upgrading is a major overhaul.

But you should also know that this basic iPad is a lot like last year’s 2019 iPad Air and iPad Mini. So much so that, really, they’re variants on the same device. (That 2019 Air is gone from Apple‘s website, but the Mini remains.) Think of it as last year’s Air for less, and it’s a good deal. But it’s also an older iPad design. It still has a Touch ID home button and a headphone jack. And it still uses Lightning to charge and connect accessories, even though the upcoming iPad Air and current Pros use USB-C.

Here are the key similarities and differences between this new iPad and last year’s Air and Mini:

So this all adds up to: The iPad Is Totally Fine. More than fine, I’d say. I’m writing this review on it using the smart keyboard (editing and prepping on CNET’s content management system is still best on a laptop).

The iPad still isn’t as useful as a Chromebook for a lot of school tools, at least in my house. App support is amazing, and Apple’s streaming-friendly ecosystem also helps it double as a fantastic little TV. But multitasking and file saving are still weird and frustrating, even with iPadOS 14 improvements.

iPads in my house tend to be free screens we grab to do things, and this basic iPad fits that role fantastically.

The fancier Air comes out soon, and it looks nice. It’s also nearly twice the price. As a result, it’s not the same product at all. The Air looks like it would make a lovely gift for someone who needs a more powerful iPad for art or graphics work, and wants to save over the Pro. But for most people I bet this iPad will be fine.

Why is the camera on the side?

Most annoying iPad feature in 2020: The front-facing camera is still on the side in landscape mode, which is the mode most of us do chats and Zooms in. My face ends up off-angle and strangely centered, staring off into space. The iPad’s camera is good enough, even in a step-down mode, and better than most laptops. But it’s terrible for centering your face. And everything now is Zoom.

The Logitech Combo Touch has a trackpad, but its bulkier case and kickstand design aren’t great for lap typing. It’s perfectly usable, but at $150 it’s an expensive accessory.

There’s no Apple Magic Keyboard for this iPad, but you can use Apple’s older smart connector Smart Keyboard cover, which is compact but lacks a trackpad.

Trackpad and mouse support is the best 2020 iPad feature

Just like every other recent iPad, with iPadOS 14 you can connect a mouse or trackpad (or get a trackpad-enabled keyboard case). I find it a huge help with editing and navigating, especially while the iPad is propped up on a desk with a kickstand case.

I was able to do a Zoom for an hour without making much of a dent on a full charge. I multitasked, read, watched shows, played games, worked on stories, and the battery held. No surprise, since the iPad’s claim of around 10 hours of battery life has been the same for years, though it varies a few hours more or less depending on the model. I haven’t done a battery benchmark but it’s doing a full day with ease. The included faster charger is welcome.

What I miss most from better iPads

Compared to the higher-end iPads, this one lacks the extra screen real estate on its sides. This larger-bezeled iPad is fine, but in multitasking modes with two apps open it starts to feel cramped. The next iPad Air (or iPad Pros) feel considerably more expansive, even if it’s just an inch or so. Most laptops, TVs and other screened devices make a big deal about how narrow their screen bezels are. Still, this only really matters if you need to multitask — keeping Slack and Gmail on screen at once, for example, or writing while following news feeds. It can be done on this iPad, but it works better with a second screen that’s narrower (like an email, Twitter or Slack stream).

I also miss the TrueTone on the 2019 iPad Air and iPad Pro (and iPhone). It auto-adjusts color temperature, and I’ve really gotten used to it. This iPad’s display seems harsher or bluer than I’m used to. It also lacks the fancy 120Hz refresh of the iPad Pro, but you might not notice the difference. The 2,160×1,620-pixel display is otherwise great.

If you’re looking for an iPad and have no idea which to get, this is the safe iPad bet and the one you should probably buy. It officially starts at $329, but many stores sell it for $299, which can drop to $250 during sales. And, yeah, I’d recommend going to the $429 128GB model for that extra storage security blanket if you’re considering downloading more than a handful of apps. If you’re a pro, and need pro-level features, then you’re already considering the iPad Pro or the upcoming improved iPad Air. For everyone else — families, students, anyone looking to pick up a good versatile extra screen — this is where you’re likely to start looking, and also where you’re likely to end up.