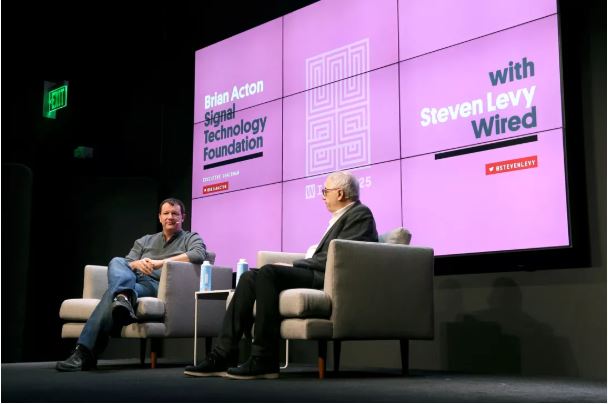 Facebook confirmed this year it’s planning to add an extra layer of security to its messaging services as part of an effort to make it possible for WhatsApp, Messenger and Instagram users to send messages to one another without switching apps. That might be tougher than it sounds, WhatsApp co-founder Brian Acton signaled Friday.

Like WhatsApp, Facebook Messenger and Instagram messages would be end-to-end encrypted, meaning messages couldn’t be viewed by anyone outside the sender and recipient. The three apps would still be separate, but they’d be brought together under a single messaging platform or protocol. Still, Facebook CEO Mark Zuckerberg and his team still have a lot of work to do to make this goal a reality.

“Mark has has set himself up with a very tall order and I think it’s going to be years in the making,” said Acton, executive chairman of the Signal Foundation, at the Wired25 conference in San Francisco. “The proof is really going to be in the pudding.”

In January, The New York Times reported that Facebook set a goal of finishing the work by the end of this year or early 2020. A Facebook spokeswoman didn’t have an update about the project.

Facebook’s plan to end-to-end encrypt Instagram and Messenger has raised concerns that it would make it harder for law enforcement to solve child exploitation crimes. Last month, government officials from the UK, US and Australia asked Facebook to pause these efforts.

Facebook’s plan also comes as the company faces scrutiny for a series of privacy scandals. Last year, revelations surfaced that UK political consultancy Cambridge Analytica harvested the data of up to 87 million Facebook users without their consent. Some cryptographers also worry that WhatsApp encryption could become less secure.

Cox, who also spoke at the Wired conference, confirmed that he did clash with Zuckerberg. After 13 years at Facebook, he also wanted to do something outside of social media.

“Mark and I both said we saw things a little bit differently,” said Cox. Those two factors helped Cox make the decision to leave the company.

Cox added, though, that he thought encryption was “great” because it offers “an enormous amount of protection” but the industry is still looking at how to balance privacy with keeping people safe. Misinformation on WhatsApp, for example, reportedly led to lynchings in India, prompting the messaging app to limit the amount of messages that can be forwarded along with promoting digital literacy.

“There are pros and cons with these systems and … I’m not a hardliner on any one of them,” Cox said.

Acton, pointing out that foreign entities are interfering in elections, pushed for more encryption, not less. While bad actors will also find ways to abuse technology, he said good actors, like lawyers, journalists, doctors, activists and the press, need stronger protections.

“If you want to be on Facebook and you want to have ads pressed in front of you… go to town. I mean that’s your choice,” he said.

He added that tech companies should explore other business models outside of advertising, which Facebook makes most of its money from, because it doesn’t necessarily make the product better.

“There should be more business model innovation in the internet in general,” Acton said.